Why can't my solar inverter produce more? Why does it stop producing at the best time of the day and of the year? What is inverter clipping?

Solar Inverters could be clipping and stop producing more power when the sun is out in the summer. This phenomenon is called clipping. This is because the goal is to have maximum power generation for the entire year, not for 1 specific moment.

At Ipsun Solar we receive regularly calls from our customers asking us why the power generation of a solar system is not optimal. Our customer usually says something like "I see on the graph that at the best time of the year and the best time of the day, our inverter stops producing power." or it sounds like this "You gave me solar panels of 380W, but the micro inverter can only generate 290W. Why did you use this inverter? Did you make me pay more for solar panels and I don't get my optimal savings?"

Here is a screenshot of the Enphase Datasheet: (keep in mind that these Enphase micro-inverters keep changing and improve over time)

The issue at hand is that it's economically more advantageous to optimize a solar energy system for the maximum energy generation over an entire year, than to try to squeeze the most energy out of the system at a very specific time. Of course most people expect to produce the most energy on a sunny day in the summer. Sadly, that's when clipping occurs, and that's when our phone starts ringing.

Ideally the best inverter matches the panel power output, but our world is not ideal and everybody wants to pay the least amount of money for the best investment. The solar industry's cost is a combination of labor, hardware, overhead and profit. For this situation the hardware cost increases when the inverter power output is larger. It will also require larger wires which also cost more and larger breakers increasing the cost some more.

There is an equilibrium, a balance between the cost of the system (labor and hardware cost) and the power production of the system over an entire year.

Enphase has a white paper called "Why Is My PV Module Rating Larger Than My Inverter Rating?" and the graph below describes that "The increased energy yield is always larger than the loss due to clipping, even at very high DC:AC ratios. Note that the inverter clipping shown is simulated first-year clipping. PV module power output degrades over time, so clipping losses will degrade proportionally." Link to paper

Energy Gains and Losses from Clipping

Below is a table with the energy gains and losses of clipping. Ipsun currently uses 380W panels with IQ7+ micros. We install in the Washington DC area which is roughly the same latitude as Denver. This means we have roughly 0.9% losses due to clipping equaling 5.9kWh, but have an energy yield of 29% resulting in an annual energy production of 597kWh. 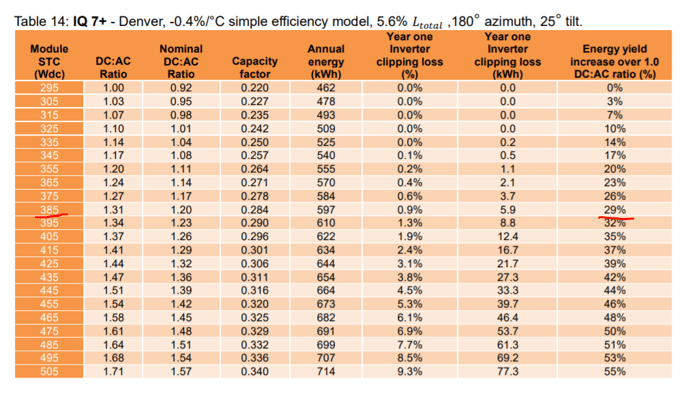 Screenshot of the internal Ipsun presentation on inverter clipping:

Clipping and power loss occurs in your solar energy system to reduce the cost of your system and the optimization of annual power production. In a manner of speaking, these small reductions are an indicator that your system was right-sized for year-round operation.

Feel free to reach out to us if this is not clear. Happy to talk about this and to making this post better over time.